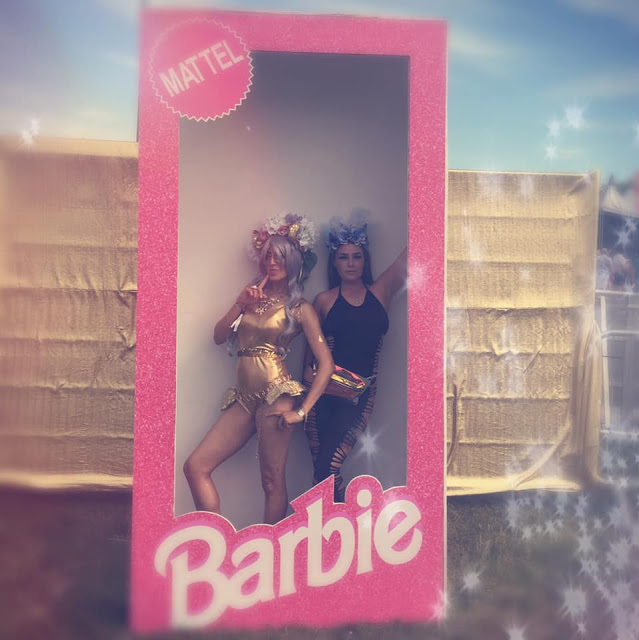 So as you know I have had a hard year, so it was about time I let my hair down….well ok its a wig, but I keep getting told now to dye my hair this colour. Lol.

I was gutted our signs where taken off us at the gate 😦 As would have been so much fun!! I need to make some new ones now. Lols.

I had an epic time.

We pushed the boat out and paid extra for VIP and am so glad we did, well the Barbie box for one…lols. The bar had no que, nice place to sit, no queuing for food and the loos where a MILLION times better. I know it sounds pampered but I would pay extra for nicer loos again! Made such a difference.

Louise, she has been there for me this year when I haven’t even needed to ask, she has just known when I needed her. Being single mums on a mega small budget we did so well on our outfits! Making things, buying second hand off eBay and a few bits from Primark. I was a little shocked we where pretty much the only ones this dressed up! I have a background of club promotion and dance so for me this was;t that dressed up and very much like what I used to wear club dancing back in the day…

Mostly we got loads of love for it, high 5’s, hugs, loads and loads of photos with people but there was the odd horrible comment. We where really covered up compared to a lot of girls, who had bums, tums and boobs out. We where covered up, my bum was a little out but I was head to toe in glitter. lols. Yes am still getting it off now, and anyone who hugged me got covered.

We meet loads od wonderful people! Some like us who had gone for it. I was disappointed that others felt the need to drag me down about what I was wearing. We girls should build each other up not pull each other down. I saw someone dressed up and living there best life, and I would hug, high 5 or tell them!!!

A few where horrible and then I would get chatting to them about being a mum of three, going through divorce and that I was not caring what others thought anymore. For years I was dragged down about how i look, being over weight, wearing clothes he hated, said he hated being seen with me etc. So sod it no one is telling me what I can wear again!

Lets take a moment to thank you everyone who helped to keep us all safe and was nice about it.

Drugs. DONT DO DRUGS KIDS.
Its not big and its not clever.

Its not like it was back in the day, its stronger, and cut with god knows what. Not only is it dangerous, it also messes with your mental wellbeing. 12 men take their own lives in the UK, every week. I look younger than I am so getting chatted up by guys in the 20’s and its shocking how many are not just having the odd thing for a big event but taking stuff all the time, even when just down the local for drinks with friends 😦 Then getting into a pattern of needing it just to get up for work….
Ive watched it mess with people, making you confident and in love. You do not need white stuff to talk to people or have a good time, you do not need to take something you have no control over once its in your body to dance and have fun. I was so upset that some guy watched me dance and then made a rude comment about ‘how many pills’ No I wasn’t even drinking on day two as I  knew I had the kids early. Just cos am confident and love to dance does not mean i need drugs to do it. Its sad that its something which people are relying on to have a good time.
I have been clubbing since I was 14, I have worked in clubs and large events, the first festival I went to I was 2, lols. Ive seen a lot of stuff. I get you feel down and want that high, but don’t. It will pull you up and then slam you down to the ground, lower than you where before.  It messes with you long term. I know drink is just as bad, but at least you can see most of the time when to stop. Once you have take something, you have no control over it or what it may do to you.
I will touch on this again in my next blog about day two.

So excited, a new club Eden, is opening in Gunwharf. Tiger Tiger is closing after something like 18 years and being replaced with Eden. I am really looking forward to seeing what they have come up with.

How cute are these two from the club too 😉

Am not going to lie, I think these are my new fav shoes!!! (The glittery gold ones) I love them!! 12 hrs of dancing and my feet where fine. A hidden heel too! As am so short. They where great in the field and so easy to wear.

I will be writing a little blog with festival outfit tips coming soon so keep an eye out.

Loads of people asked me where I got my headdress from, so as I made it, I think I should start selling them!! Will share a link to my ETSY site soon 🙂 I had gone for a retro Mermaid feel, but the shoes changed the colour of my outfit so I turned in to the girl in gold lols. A few people still said mermaid which was cool. I did hid in vip a few times as I was getting evil looks and nasty comments. I felt very on show, and people can be mean! A lot of people thought I was working there. So much so, we both dressed down a lot for the second day. Oddly even though I was far more dressed down I still got the same level of hate lols and less of the love!

Wow, Craig David has still got it! Love his set. WOW Rhythm of the 90’s they where EPIC!! I loved how you could wonder around to different sets and acts, the balance was perfect!

We didn’t stop dancing, till Lou’s feet where bleeding!! I lost my rainbow thing and was handed some glasses by a drunk guy! The temp really dropped and we where both freezing.Getting home was hard work and we really felt 12hrs of dancing the next morning!!

3 thoughts on “South Central – day one”

This site uses Akismet to reduce spam. Learn how your comment data is processed.